This spring semester, students at the University of Wisconsin-Madison will have a new opportunity – and given its uniqueness and subject matter, there’s a good chance it will fill up in record time! The University of Wisconsin-Madison College of Agricultural and Life Sciences and Wisconsin Brewing Company are partnering to teach a Fermented Foods & Beverage laboratory class with real world applications.

This groundbreaking semester-long program will combine classroom and laboratory study at the UW with on-site, hands- on brewing instruction at WBC, complete with guidance and insights from Kirby Nelson, WBC’s award-winning brewmaster and 30- year veteran of the beer industry. Through this unique partnership of industry and education, students will enjoy the dual benefits of enhancing their learning experience and putting their skills to the test, via a real-world commercial-scale brewing environment. A highlight of the course: Student groups will have the opportunity to develop their own Red Lager recipe, brew it on the Babcock Hall pilot brewery, and then have it judged by a group of industry experts. The best Red Lager will then be brewed on a commercial scale by Kirby at WBC and should be on sale this spring.

“We’ve conducted courses in fermentation science for some time now, but the opportunity to complement our lab-based programs with actual, practical applications in the field adds a whole new dimension,” said Jim Steele, professor in the Department of Food Science in CALS. “It’s a really amazing opportunity, for both students and CALS.”

“We are incredibly excited to collaborate with the University of Wisconsin on this new program,” said Carl Nolen, president of Wisconsin Brewing Company (WBC). “The folks at WBC have a passion for the Badger State’s rich brewing tradition. Beer is an integral part of Wisconsin’s history, woven into our fabric of life, and we want to see that heritage continue to grow and thrive. And we couldn’t imagine a better way to inspire new generations than combining our brewing experience, expertise and facilities with the exceptional minds and laboratories of the UW.”

“It’s a win-win for students, CALS, WBC — and future generations of Wisconsin beer-drinkers.”
Posted by Wisconsin Brewers Guild at 9:32 AM | 0 comments

The World Beer Championships are an on-going blind tasting competition throughout the year conducted by the Beverage Testing Institute (BTI) of Chicago. The competition includes beers from breweries around the world including the United Kingdom, Canada, Australia and the United States.

The Dubious Ruffian Stout received a “highly recommended” rating of 85 out of 100 points. A full review of the beer can be found at http://www.tastings.com/scout_beer.lasso?id=209353. This marks the eighth award Badger State Brewing Co. has received since opening in late 2013.
Posted by Wisconsin Brewers Guild at 9:22 AM | 0 comments 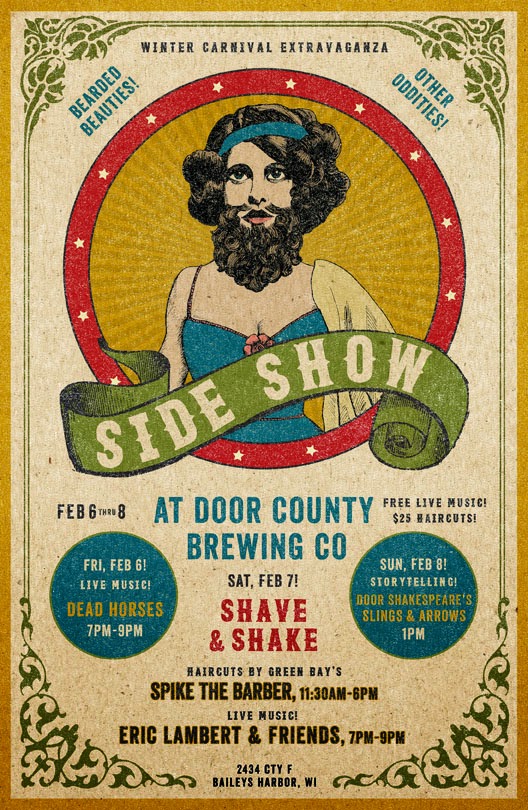 Posted by Wisconsin Brewers Guild at 9:52 AM | 0 comments

The event that thousands of people look forward to every February to cure their cabin fever....Capital Brewery Bockfest 2015.... a one of a kind, not to be missed, winter mardi gras type event held at the Capital Brewery Bier Garden in Middleton, Wisconsin!

Bockfest 2015 will feature Capital Brewery beer, fun, great food, costumes, live music, and the annual Running of the Blondes 1K Race. A must see if you can’t make it to the Boston Marathon. Music will be provided by Hello Weekend.

Featured food vendors include Capital Tap Haus and Middleton BBQ. Special this year, Sassy Cow Ice Cream made with Capital Brewery limited release beers also will be available. All Bockfest information can be found at www.CapitalBrewery.com.

Tickets for this legendary event are limited. They will be available for purchase on Saturday, January 17th, 2015, at 9:00 am, and will go quick! Ticket outlets include the Capital Brewery Gift Haus, Capital Tap Haus, Steve’s Liquor locations (McKee Rd, Junction Rd. & University Ave), and Star Liquor on Willy Street. Tickets are $15 each with a limit of 4 tickets per person (cash only). New this year, a limited number of tickets will be available for purchase online beginning Monday, Jan. 19th! Please visit our website www.CapitalBrewery.com for more information. Must be 21 years of age or over to purchase tickets and/or attend event. A valid ID will be required for retail ticket purchases or pick-up. Show will go on rain, snow or shine!

Bockfest tickets are good for entrance (11am - Noon) and ticket holders will receive a 22oz commemorative Bockfest 2015 beer drinking mug. After 12 noon Capital Brewery will allow the general public in with paid admission at the gate (cash only), subject to crowd limitations.

Capital has again partnered with local hotels including Country Inn & Suites, Staybridge Suites, Courtyard, Fairfield Inn, Residence Inn, and Hilton Garden Inn. These hotels will offer two tickets to Bockfest 2015 included with a room rental for the weekend of February 27-29. Visit our Bockfest page on capitalbrewery.com for direct links to hotels. Go to www.VisitMiddleton.com for additional lodging and restaurant information.

Founded on March 14, 1984, Capital brewed its first batch of beer in the spring of 1986. The company has received over 200 major awards in both domestic and international competitions in over 15 categories, and Wisconsin Amber has been available in cans since 1997. Capital was named Grand National Champion in the 2013 US Open Beer Championship, winning six medals.


Posted by Wisconsin Brewers Guild at 9:44 AM | 0 comments


Seasonal favorite returns to Wisconsin on draft only until spring

Eagerly anticipated by bock beer fans each January for decades, the malty seasonal brew is available now on draft only in select Wisconsin markets through March while supplies last. Click here for a list of accounts in the Stevens Point area.

Point Bock’s origins can be traced back to 1938. Point resurrected the rich, dark amber German-style bock beer just for Wisconsin after Point Brewmaster Gabe Hopkins dusted off an old recipe from the late 1980s that he found in the brewery’s archives. A retro tap handle crowned by a vintage Point Bock logo featuring a goat’s head – "bock" means billy goat in German – supports the reintroduction of the handcrafted brew in Wisconsin bars, taverns and restaurants.

The Bock Beer Tradition
Bock is a centuries-old style of German lager beer, traditionally brewed each year in winter for consumption starting in the early spring. German immigrants who flocked to the America in the mid-19th century brought with them their taste for bock beer and the knowledge to brew it, according to Joe Martino, Stevens Point Brewery Operating Partner.

Point Bock is also a tradition for running enthusiasts in central Wisconsin, sponsoring the first Point Bock Run in 1982. The 2015 Point Bock Run is scheduled for Saturday, March 7. The 5-mile road race, limited to the first 2,000 runners (registration is closed), starts and finished at the Point Brewery and crosses the nearby Wisconsin River twice.

Where to find Point Bock draft Point Bock is available primarily in Stevens Point Brewery’s core markets in central Wisconsin, with some distribution in the Milwaukee and Madison metro areas.

For more information about the Stevens Point Brewery, please visit www.pointbeer.com or call 1-800-369-4911. Tours of the brewery are available; schedules are listed on the website.
Posted by D.L.Schiller at 3:25 PM | 0 comments


Leading craft brewer makes it a point to add jobs, expand again in 2015

STEVENS POINT, Wis. January 7, 2015 – Following another year of solid growth in 2014, in 2015 the Stevens Point Brewery will create more new jobs and invest $1.5 million in brewery renovations and upgrades to improve quality and help production keep up with consumer demand.

The improvements include a new can filler, new brewing and quality control equipment such as a 300-barrel bright beer tank used for conditioning beer, and renovations to the brewery's popular gift shop. The brewery also plans to hire two more salespeople and another quality control technician, according to Joe Martino, Stevens Point Brewery Operating Partner.

"We enjoyed another successful year in 2014 as our production volume was up double digits, with particularly strong sales of our Ciderboys hard ciders," Martino reported. "Investing in our people and infrastructure to ensure our production capacity keeps up with consumer demand is a key ingredient in our recipe for continued growth. We are looking forward to another exciting year for our brewery"

Work on the gift shop renovation as well as improvements in other areas of the brewery will begin in January. The projects will conclude in May with the installation and startup of the new can filler just in time for summer, the beer industry's peak season for sales. The can filler will greatly expand Point's can-packaging capabilities, especially for 16-ounce cans, which represent one of the hottest packaging trends in the craft beer market. The brewery's current 16-ounce can packages include Point Special Lager's popular "Big Charlie" 16-ounce can and the summer seasonal, Nude Beach 16-ounce can.

"We expect more and more craft beer lovers to embrace can packages and we want to be able to offer the widest possible range of packaging choices for our loyal fans," Martino said. "The new can filler is the right piece of new equipment at the right time."

This year marks the sixth consecutive year of major expansions at the Point Brewery. Between 2010 and 2014 the brewery invested more than $7 million, including $1.5 million last year for electrical and cooling systems upgrades, bottle filler upgrades and more new unitanks for fermenting and aging beer. And 2015 is the second year in a row the brewery has created jobs: last year it added 10 new positions, including six in its busy packaging department.

For more information about the Stevens Point Brewery, please visit www.pointbeer.com or call 1-800-369-4911. Tours of the brewery are available; schedules are listed on the website.
Posted by D.L.Schiller at 1:58 PM | 0 comments

Feel free to contact us with questions and/or comments.